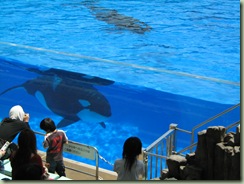 It was Selina’s birthday yesterday (ten years old – TEN YEARS!). Happy Birthday little one. Today we all went to Nagoya Aquarium which we’ve been going to for … well, nine years now! It was a hot day, 28 degrees. Nowhere near as hot as it gets and without the humidity that will come after the rainy season but having spent a year in the UK with a crap summer it was hot. The aquarium never gets old for me and Alisa just LOVED it. Both Selina and Hugo never really showed any interest in animals as such (the first time we took Selina to the aquarium she just fell asleep I think). But Alisa loves all that stuff.

The dolphins (as always) were great and they have a killer whale as well which is cool. There are a number of shows during the day where you get to see them doing cool things. If it’s too hot (or too cold) you can always view it from under the water in the viewing chambers. They’ve had music events there as well and I can see that would be cool. It’s very chilling and relaxing down there (unless you go at the beginning of golden week with three manic kids and the rest of the Nagoya population). When you’ve done that part there’s the normal aquarium to go to where you can see a lot of fish, crabs, turtles, penguins and most other things. When you’re there with somebody like Alisa it makes it all worthwhile.

if you’ve ever in Nagoya go and visit. It’s a nice day out. With car parking (but excluding food and pressies) it cost us about 6,000 Yen (30 quid).