Hello. I’m not dead yet, although the current quantity of phlegm etc must suggest otherwise. As I can’t sleep and as I have just reinstalled one of my laptops AGAIN I thought I’d take the opportunity to offer some comparisons of the different machines I’m running and how they compare.

There are currently five machines I use daily. Three of them are portable (yes, I’ve been carrying them all backwards and forwards to the office) and two of them are desktops – one at home and one at the office. Here’s what they do and what they’re running:

This dual boots Vista 64 Bit and Ubuntu 9.04. It’s an excellent gaming PC although I have little time to play on it and actually use it mostly for just multiple terminal sessions ssh’d to client machines when working from home! Having said that, when (WHEN) I have some serious time, it’s awesome for developing on.

The config is also great for overclocking although on this particular machine I haven’t spent any time doing so. I’m planning on sticking Windows 7 64 Bit on here at some point in the not too near future as I do have some problems with the Vista install. On the whole though – it’s a great (and currently underutilised) machine.

Oh, the cooling fans give off a lovely blue glow as well 😉

As detailed here, this is my main machine. Awesome machine, dualboots between OS X and XP although 99% of the time is just spent in OS X. At work it’s dual monitor and handles all my web browsing, itunes, emacs, textmate, mail. Everything. Also has vmware on with Ubuntu and XP virtual machines when needed. A thing of beauty – if only the form factor was a little smaller. 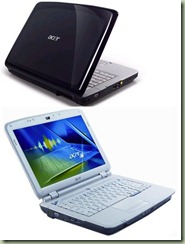 My second main machine in reality. This laptop is a little gem. Yes – it does look like a fisher price toy (especially when open) BUT it’s just a great machine for running VMWare workstation on (I had a 12 system Ubuntu VPN config simulated on it once). The keyboard is big enough to make typing easy (I’m typing on it now) but the whole form factor is great. 2GB of RAM and a Core Duo processor T5750.

Until yesterday it was dual booting XP and Ubuntu 9.04. Mostly used for XP and VMWare workstation, yesterday I wiped it and stuck Windows 7 on it. Yes, yes I know. But it runs like a DREAM. It’s far more responsive than either of the other two OS’s were on it (even installed from new), every driver worked from the beginning, hibernation/suspend JUST works, all the special function keys JUST WORK. I’m not a Microsoft fan by any means and Windows 7 is hardly a revolution but I’m impressed (it’s the main reason I’m typing this up).

Because of the size of this machine, it’s the main machine I just pick up when I need some portability (the MBP is just too big for that). 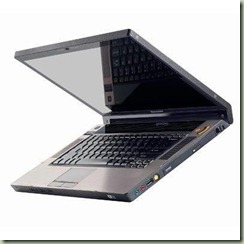 A new addition to the family.  Came with XP, now has CrunchBang Linux (Ubuntu based) installed as dual boot. I’ve been coveting one of these for a while as I’ve always wanted a NetBook with good keyboard and good battery life that can run Linux. Specifically for just undisturbed coding within Emacs. This little baby does it all. I love it – and I’m about to remove XP from it completely and make it CrunchBang only. The battery life on these is superb (6 hours) and CrunchBang is a great distribution to run on it. I must resist the temptation to put Windows 7 on here as well. Although, mmmm – it’s a nice thought. 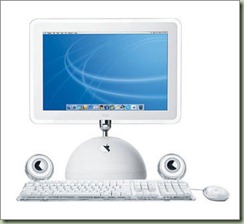 The oldest computer I still use, the classic ‘tablelamp’ look still has something about it. 512MB of memory, PPC processor running at 1Ghz, 17” screen. I confess – I really only use this for terminal sessions, iTunes and more recently Spotify – but it’s a great little machine and for a complete audio pleb like me – I like the sound the little speakers give out.

So in conclusion I think I can safely say, I use far too many computers in my day to day life. Which reminds me of one other thing. I always find there are certain files I want on all five machines and keeping them in sync has always been a nightmare – UNTIL. Dropbox. Works fine on everything. You won’t know it’s there. Perfect.

Now god help me if Apple ever release a 12” MBP.

3 thoughts on “>My machines”