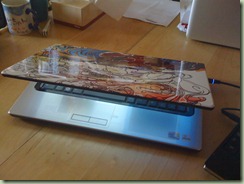 I hate Dell with a loathing that is hard to put into words. Nevertheless, I now have a Dell laptop. I love screen space and this 15” monitor has a 1920×1050 screen. Portable (it’s bigger but lighter than my MBP) and with a great screen resolution it’s great for developing.

Build wise it sucks. A lot of keyboard flex which doesn’t bother me but doesn’t say much about quality. The surround around the screen is also very flexible. It also has NO indicator lights for wifi / hard disk / pretty much anything. Very sparse. It came with Vista, which lasted for ten minutes (just long enough to check the laptop worked) before I wiped it and put Jaunty on. The lid design has been roundly mocked by my colleagues and my eldest daughter. Personally I like it although it does have the look of have being vomited on. The overall look of the laptop is slabish. If I hadn’t used the name ‘pig’ for the little NC10, I would have given the name to this laptop but for less affectionate reasons. Here are the basic specs:

The nice thing I like about it is the Compiz environment which *is* just so much eye candy but I actually like how I interact with it. First of all, the screen resolution gives a lot of space. I can easily run emacs with two 80 column spaces side by side and have space for a couple of terminals. Yes, the machine is called ‘Picard’. Yes, it does have ST:TNG sound effects on it. Yes, I am a sad sad man.

The screen is set into six virtual desktops. As you can see, we go into eye candy heaven with this. I can rotate around easily just using the keys if I want, but also easy to do with a mouse or the track pad. Being able to see stuff like this works very well for quickly navigating around multiple windows and desktops.

And it’s great for showing off as well 😉