My last posting detailed getting my Arduino displaying a temperature sensor on a LCD. That worked fine. Soon after that I took delivery of a Netduino. A Netduino is … well … to quote from http://www.netduino.com/: 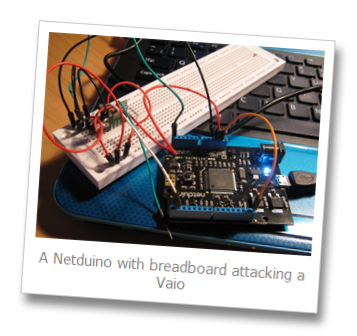 So my plan was to take what I’d done before, but this time, put the temperature sensor on the Netduino and transmit the data to the Arduino (using the RF link transmitter and receiver shown at http://is.gd/f4n3Q), and the Arduino LCD would display it. I spent quite a few hours working on it last Friday evening. A lot of pain was caused by learning some basics of .NET and C# (many thanks yellowduino on the #arduino irc channel). I fiddled with it relentlessly Friday evening and bits of Saturday and Sunday. I stopped trying to transmit the temperature and instead just worried about transmitting a set string.  But I just could not communicate from the Netduino to the Arduino.

Not quite true. I could see things ‘changed’ when I switched the Netduino on – the data on the arduino might show signs of seeing something. But what i was actually transmitting from the Netduino was never displayed on the Arduino LCD. I switched anything that could possibly interfere off but nothing. Eventually, Sunday evening, I gave in. I really didn’t mind that much, I learnt a lot and that, rather than the accomplishment, was important. But still …

This Friday evening I switched it all back on again and it worked first time. First time.